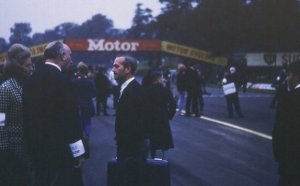 Anthony Colin Bruce Chapman, the chap really does have a lot to answer for. I suppose my love affair with the Lotus Brand started with seeing Ayrton Senna’s 97t on a JPS promotional tour stopover on the North Wales Riviera in 1985, well to be precise Rhyl seafront.
From that day I promised I’d one day have a car with the little green and yellow badge, what I didn’t realise was it would be 21 years later before I did!!
Looking from afar I rejoiced as I’m sure many of us did at the launch of the Elise in 1996, possibly and I’m still quite convinced of this, the ultimate sports car for sensible money in the last 30 years. I’ll apologise straight away that I don’t consider the MX5 to be a sports car, pretty yes, a tourer of the MGB variety yes, handles well sort of, a sports car very much not.
Mid 2006 and I decided that it was now or never, my wife and I were at that delicious point one gets to of having the house/jobs etc and being able to cover the bills, it’s normally a 3 year window before you start thinking of unleashing a sprog or two into the world. One Saturday morning I set off to the local Lotus dealer who was having an open day, rather sensibly I left wallet and means of securing finance at home. A good nose around and an invite to their track day saw the seed planted, but do we go S1 or S2 hmmm. Well the trackday and conversations with various people saw me nod towards an S1, possibly the purest of the breed and I was aiming for a really early unmolested one, this was going to be a keeper (who was I kidding).
One lunchtime whilst browsing a certain auction site an Azure Blue one came into view, the colour was spot on, the price was good and the history checked out. A quick day booked off and a trip to leafy Herefordshire saw my father and I arrive at a lovely barn conversion, the Elise was parked on the lawn out the back. I made the cardinal sin of not massively looking at the vehicle but just urgently firing it up and going for a test drive, it probably took the gear change from 1st to 2nd and I was sold on it. The car was being handled by the sellers dad so a few messages back and forth between seller and myself and a deal was struck, giddy with excitement was not a phrase strong enough to describe my feelings.
A rainy Friday and there I was about to drive home in my Lotus, I needed to repeat that MY LOTUS,jeepers what a feeling. Now call me sad but for any new car purchase I always make sure I have a CD ready for the drive home, something akin to setting the mood if you will, I picked two tracks for the first ten minutes, Irene Cara’s ‘What a Feeling’ and the Kenny Loggins classic ‘Highway to the danger Zone’, both somewhat apt I felt….the rest was played out to Jamiroquai.
In 2006 an Elise was a fairly rare sight, indeed they are possibly even more so now, so the interest it gathered wherever you went was a surprise. The biggest surprise however was it was always a friendly interest, never any animosity, I could only put this down to the brand. 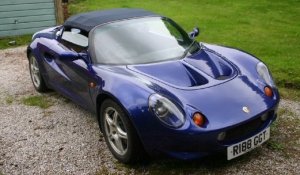 So began my love affair with R188 GGT, even the plate was appropriate. I won’t particularly bore people with a miniature road test of the Elise as that’s been done to death, but I’m a firm believer in using a car on the street. I have a real hatred of ‘show queens’ that sit forever in collections and are never used, so my driving impression of Elise came from everyday scenarios and the weather systems that our wonderful country throws at us.
The myths and facts….does the roof leak, not as such although as you opened the door it did let in some water…head gasket, in 5 K series engine cars never had an issue, ease of access and ingress, not horrendous and I’m 6ft 2, once inside there’s no place i’d rather be. Never had issues with misting up, stereo worked really well etc, only real concern was in heavy rain on motorways as the spray from trucks is at eye level, this can be quite disconcerting. The other wet related issue were the OE spec MMC brake discs, in the wet they were ‘challenging’ to say the least.
The driving of Elise is probably everything you’ve ever read and more, my preference was always roof off as it was more of an assault on the senses that way, practical? Well sort of, for a couple as we were it was perfectly fine although being quite honest I did have a BMW Tourer for the Labrador to jump in!!
Elise took us to work, out to dinner, shopping , to various motorsport events and several other outings.
Sadly though 12 months of fun had to come to an end in mid 2007, remember the sprogs I mentioned? Well we had one on the way, it was genuinely heartbreaking to part with the Elise even more so as it went on my 29th Birthday, although it was comforting that it went to a chap who had an original 50’s Lotus 7 to keep it company.
That should have been the end of Elise ownership but in early 2012 I had a window of opportunity whereby I could justify one for a short period, fortunately I found a Lazer Blue early 2001 at sensible money, a real eye opener compared to the S1 and if I’m honest not as much fun. 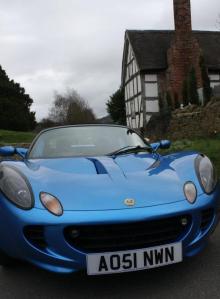 So 8 years later the love is still there for the Hethel based product but sadly the driveway I can’t envisage having one again. There’s two reasons for that, the main being the practicality with now having a family. The second being that in my opinion they are beginning to not represent good value for money, to elaborate, when they were around £8k for a nice useable one  the majority of car people you could almost justify them, however nice ones now are £12k+ which is both mentally and financially for many a whole different ball game.
I miss Elise but as my mother reminds me, at least I can say I’ve had one. 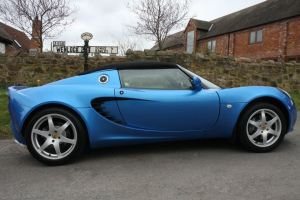